Fact: The greater your arrow speed, the greater the resistance to penetration. 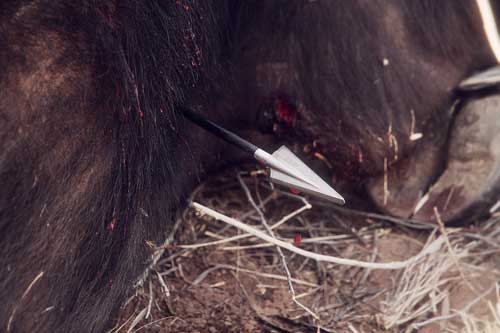 Speed in and of itself isn't bad. Opting for speed at all costs, well, comes at a cost. Here's one of them. When any object moves through another the object being moved through resists the forward momentum of the other. A good illustration of this is how the wind resists your hand if you put it out the window of a moving vehicle. The faster the vehicle moves, the more the air resists your hand.

There is a formula for determining the degree of resistance various substances have to an object attempting to pass through them. It's officially called the Force of Drag. but we generally hear it referred to as wind resistance or water resistance. This force of drag applies to other mediums as well like animal tissue, including hair, hide, flesh and bone.

is the “force of drag”

is the density of the substance being penetrated

is the reference area.

That's a complex formula but here's what it means to arrow penetration:
The faster an arrow is moving the more resistance there is to it. (Even in the air.)

Because the velocity is squared in the formula, the resistance increases tremendously as the arrow speed increases.

The cold hard truth is.... When it comes to penetration, light fast arrows lose the momentum/kinetic energy battle AND when they reach the animal they have to overcome as much as four times the resistance to penetration as slower moving, heavy arrows do.

If your goal is to gain kinetic energy on paper by shooting lighter arrows faster, science proves it's a lose-lose proposition. 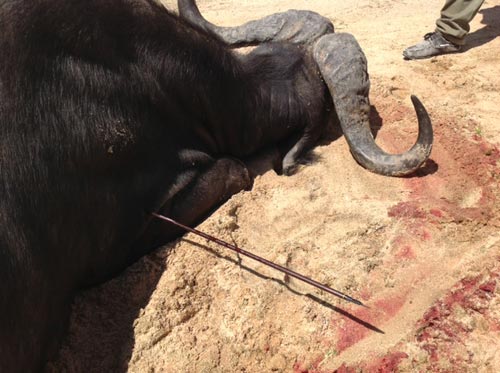 First, you LOSE velocity twice as fast as momentum AND you LOSE penetration potential in what energy you do have left because the medium you're trying to penetrate is resisting that penetration four times more than if you were moving half as fast.

The above facts reveal serious implications to bowhunters who go for 'speed at all costs'. For those who still insist on shooting lighter arrows.... If you care about penetration. If you care about increasing your chances of success and limiting your odds of wounding an animal, you MUST AT LEAST choose a broadhead designed to defeat the increased resistance to penetration. We believe the best choice is one of our GrizzlyStik single-bevel broadheads.

Note: Dr. Ashby's testing discovered that lightweight arrows don't always have what it takes to penetrate, EVEN WITH A GOOD BROADHEAD ON BOARD. If you insist on using lightweight arrows, don't be surprised if your set-up fails to sufficiently penetrate on occasion.

The real secret to getting through an animal is in the total weight, the amount of FOC, and the profile, shape, and sharpness of your arrow and broadhead combination. That's exactly why we designed the GrizzlyStik line of single-bevel broadheads and full-length tapered carbon arrows the way we did. These tough, thick, razor-sharp, single-bevel broadheads blow through anything that gets in their way; especially when powered by our; weight-forward, spine-forward, and strength-forward, full-length tapered GrizzlyStik arrows.