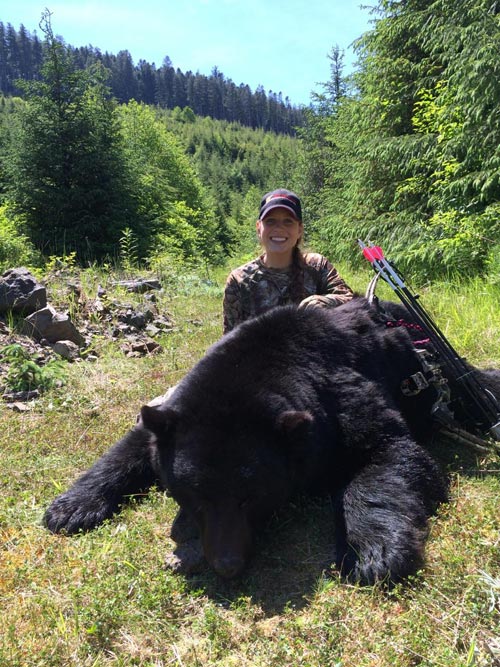 Many bowhunters shoot bows that are between 40# and 55# because they're not comfortable pulling heavier bows. This group includes many younger bowhunters, some female bowhunters, and many older bowhunters. The good news is that in Dr. Ashby's testing, even 40# recurve bows could breach the heavy bone threshold 100% of the time when shooting the proper arrow and broadhead combination. That's great news for light bow shooters.

For all bowhunters - an arrow and broadhead setup that can give them reliable lethal penetration, even when a bone is encountered, is the most important element of their bowhunting gear - period. This is especially true for bowhunters shooting bows between 40# and 55#.

Once bowhunters actually try heavier arrows with the right kinds of broadheads they never go back.

When starting out, most bowhunters are advised to shoot light arrows with light broadheads so they get faster arrow speeds, higher kinetic energy numbers, and flatter trajectories. The problem is that they often also get poor penetration and start losing animals.

The worst case scenario is when they get lucky for a while and harvest a few animals - even though getting poor penetration. Sometimes their luck holds out for quite a while.

When that happens, they start to believe that light and fast is the way to go. Eventually, though, things go wrong. Shoulder blades are hit, a leg bone or they fail to penetrate well enough for a clean kill - even on a broadside shot.

Eventually, they start to question. What's wrong? This is crazy - why aren't my arrows able to give me clean kills? Normally, there is a final - "That's it! That's the last animal I am willing to lose to an inferior arrow and broadhead setup." The lucky ones start researching for a better arrow and broadhead combination before they lose too many animals.

Light bow shooters absolutely need to set themselves up with efficient arrows and broadheads that are proven in the field, known to give complete lethal penetration on big game animals - even when shot from bows under 60#.

Here is a bowhunting truth: Every bowhunter should be shooting an arrow and broadhead combination that sets them up for success.

We recommend 650-grain arrows (minimum) with at least 19% FOC (forward of center). With GrizzlyStik arrows and broadheads, you can shoot arrows that bust through bone and dramatically increase your odds for complete penetration on big game - even from bows as low in poundage as 40#.

50# Bow = Down In 24 Seconds" We often get asked if heavy, high FOC arrows are a fit for bowhunters with short draws and/or shooting lighter poundage bows

As seen in the video, we have found it's even more important for these bowhunters to maximize arrow weight and FOC to gain effective and lethal penetration. Kristin Holt used a Mathews Jewel set to 50# @ 22.5. draw for her first archery elk hunt. We outfitted her with our 650-grain GrizzlyStik Momentum tapered arrows tipped with a Maasai 200 single-bevel broadhead. Her arrow system had a 26% FOC and it put this New Mexico bull down in just 24 seconds.

We know that shooting 650-grain arrows and fixed-blade broadheads might go against what most bowhunters have been told for years, but we are not just talking theory here. We are talking about results.

If you'd like to read up on all the testing Dr. Ed Ashby did to identify the 650-grain heavy bone threshold and the 19% FOC threshold - Read the Ashby Reports.

If you'd like to see the actual results light bow shooters have had with the GrizzlyStik system keep scrolling. Below are a few select testimonials from bowhunters shooting light-poundage bows and heavy arrows. 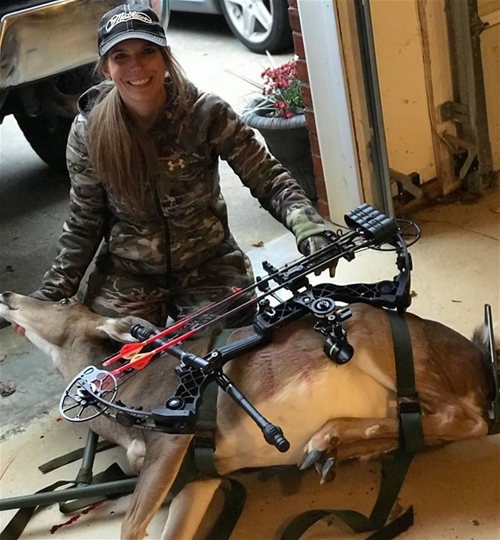 Happy Wife, Happy Life - "We were introduced to GrizzlyStik at a local NC hunting festival. I was immediately confused at the idea of such heavy arrows and point weights. After reading all the Ashby reports I decided to build some EFOC arrows for both my wife and me. In the last few years she has taken deer but only by pure luck due to terrible arrow performance. She has a 24.50 draw pulling 47 lbs on a Matthews SDX. So I built her new arrows to 504 grains at 25% FOC, tipped with a 125 Samurai.

The shot on this doe landed higher than desired but the arrow entered on a rib, (breaking it) hit the spine, (breaking it), and out the top of the far shoulder (breaking it also). The deer was dead where it stood. The devastation and laceration were unlike anything I've ever seen.

The 125-grain Samurai single bevel did everything y'all said it would do. Without it there is no telling how the situation would have played out. Best broadhead period." - Travis Fitzgerald, Proud Husband 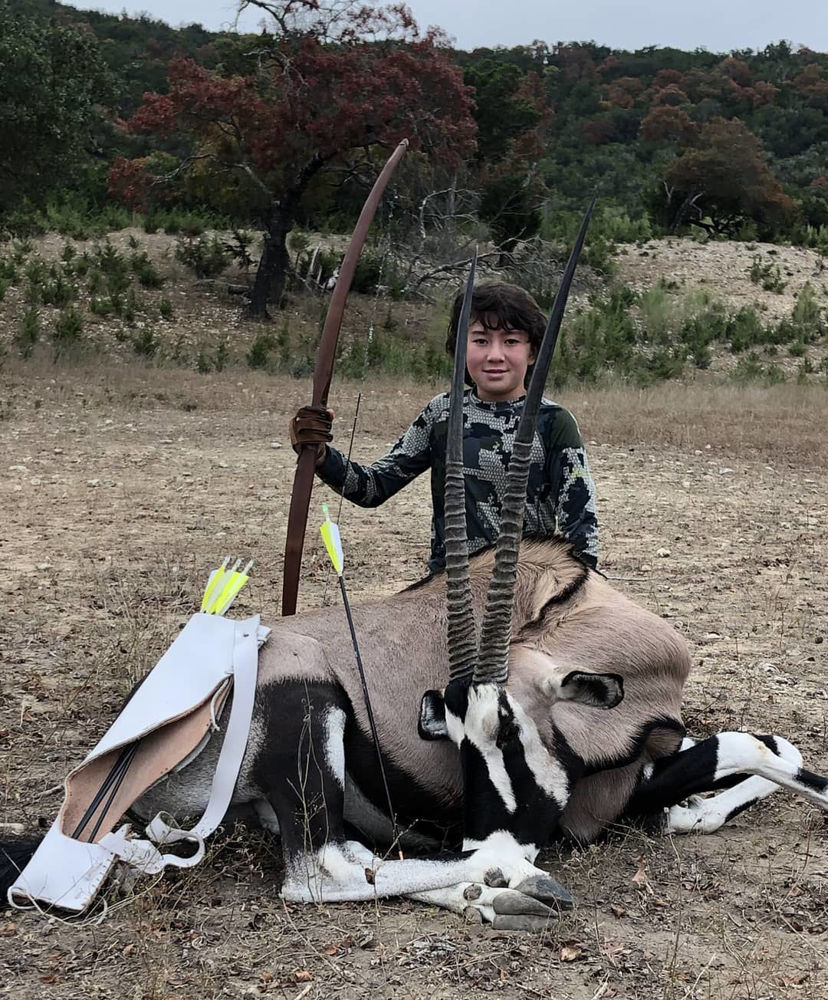 **Proud Papa** - "My son Thomas Custer with his 34? bull he took at 22 yards. I built him a 28# selfbow and matched 400 spine Momentum TDT arrows tipped with OVERKILL Samurai 125 broadheads. The total weight is 460 grains with a 21% FOC. Even with a light poundage bow and short draw length, my son placed a perfect shot and the GrizzlyStik did the rest. Thanks again for making great arrows and broadheads!" - O'Banyon Custer 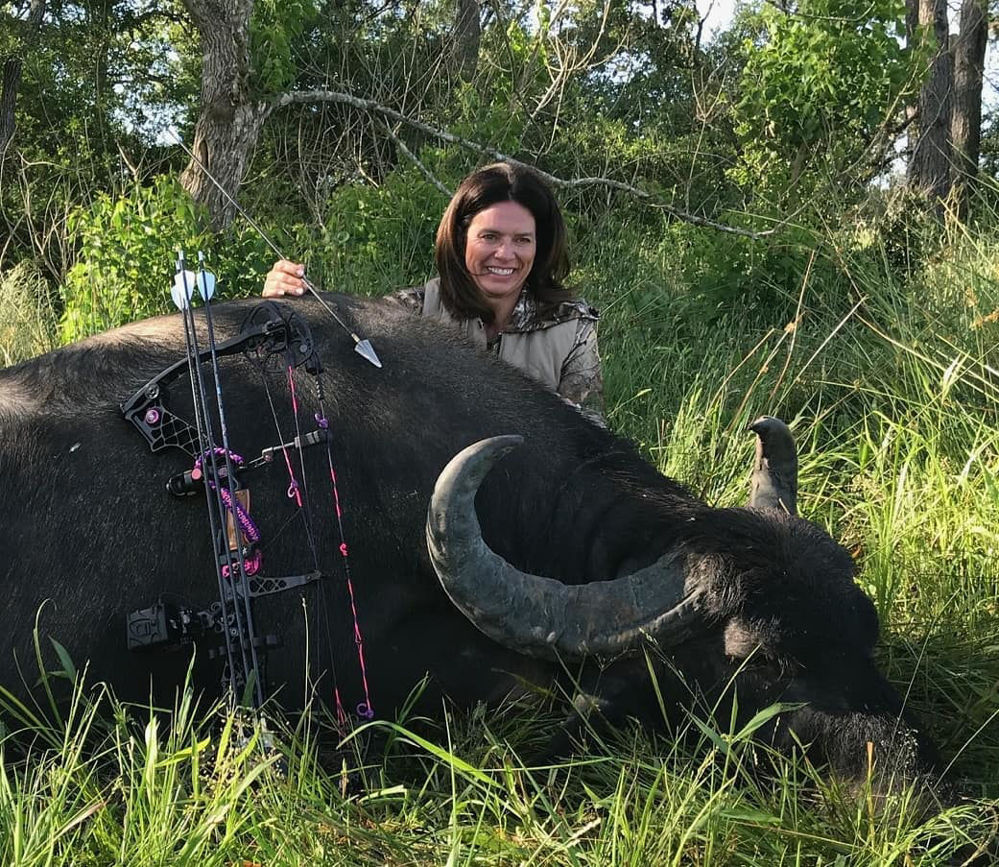 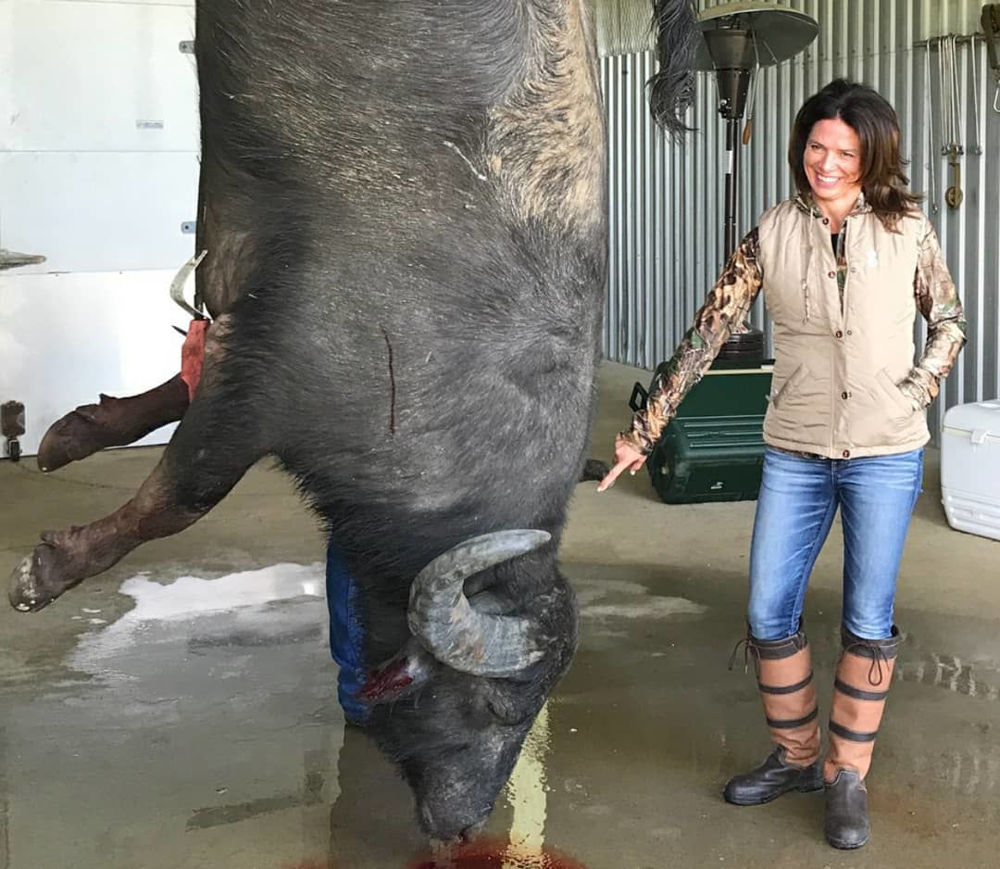 ***Black Death Prepping*** - What steps can you take when you want to go Cape buffalo hunting and only draw a 50# bow?
Step 1 - Call Rob Neilson, the President of Ashby Bowhunting Foundation, and ask for his advice in building an arrow system.
Step 2 - Advice given - call GrizzlyStik and build an 800-grain, 30% FOC Momentum TDT arrow tipped with an Ashby 315 broadhead.
Step 3 - Practice, practice, practice and gain the confidence to take hard angle shots.
Step 4 - Book a Texas hill country water buffalo hunt to test your equipment (and your nerves).
Step 5 - Elect to take a frontal shot and have your arrow gain full penetration. The Ashby broadhead was recovered in the bull's pelvis and he was down in under 30 seconds after impact. Over 5 feet of arrow penetration!
Step 6 - Take pictures and get ready for your African safari. 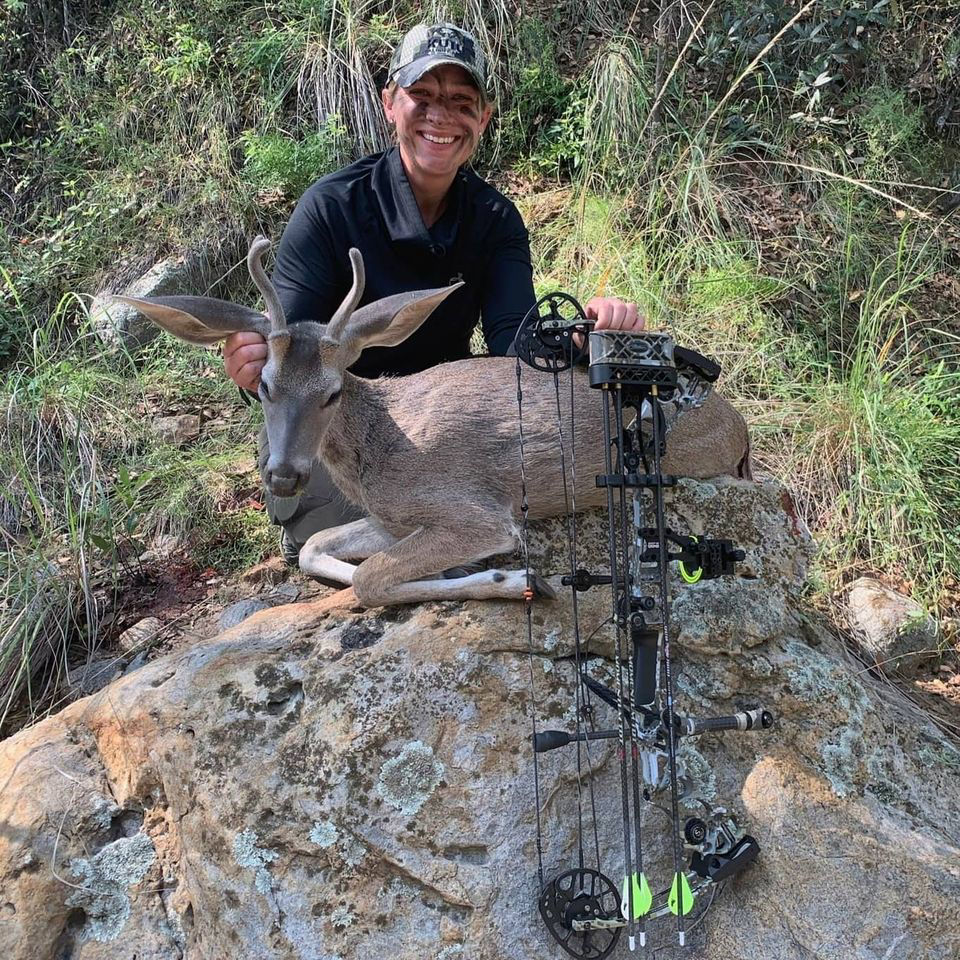 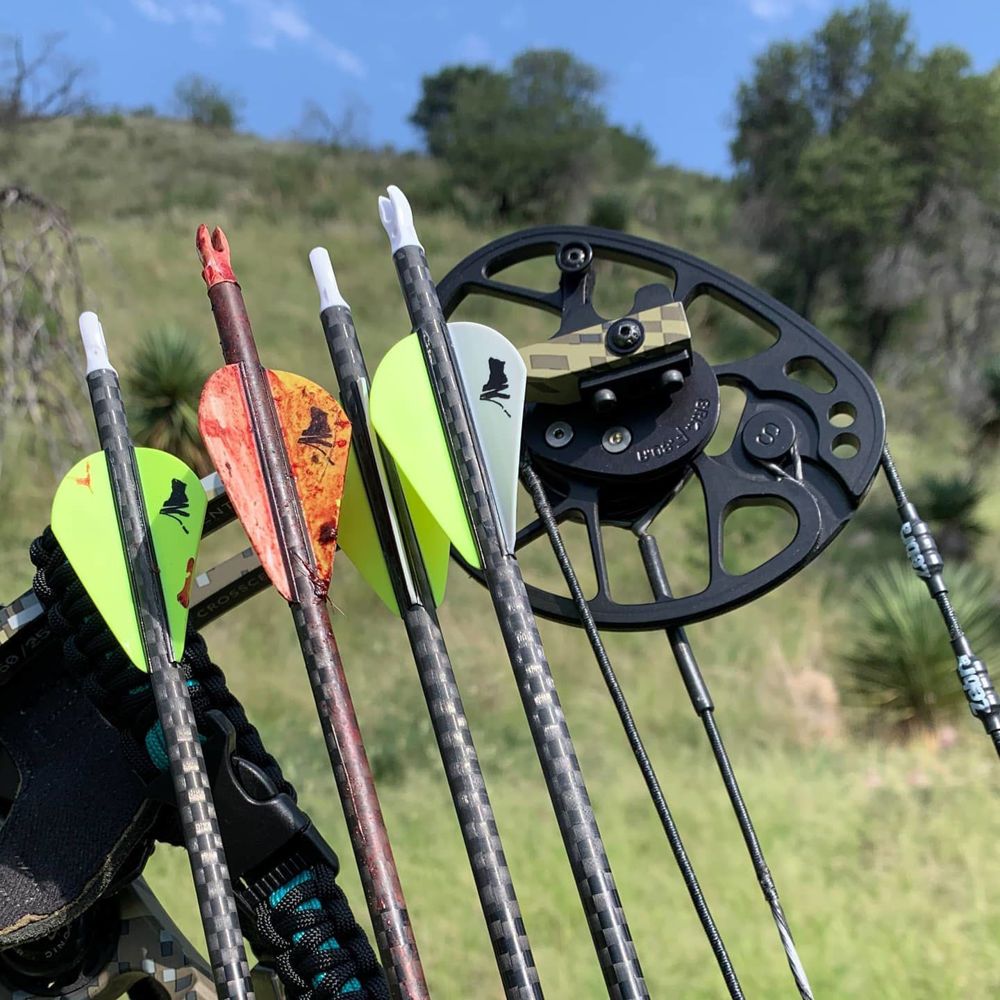 **Fuzzy First** ? "We had another successful season thanks to Grizzlystik! I took my first archery course deer last season. He's not big, but he's a trophy in my book! I highly suggest to anyone (specifically females) if you are not getting the arrow penetration as much as you would prefer, you must look Dr. Ashby's research and the results. Thanks again for making a wonderful product that we will use for many years to come. We look forward to the memories and the meat!" - Beth Chesley 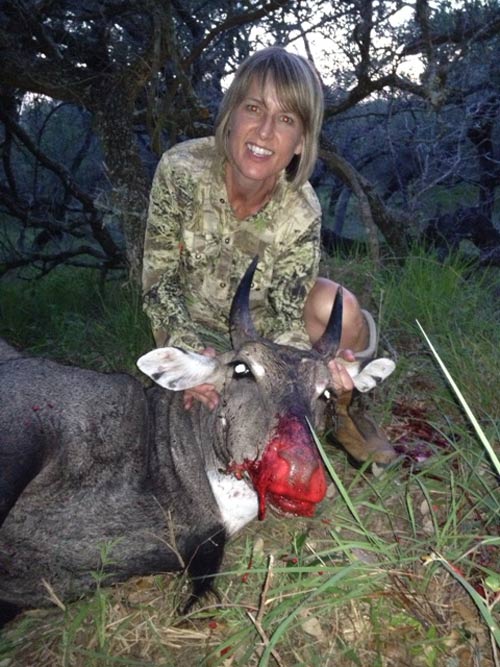 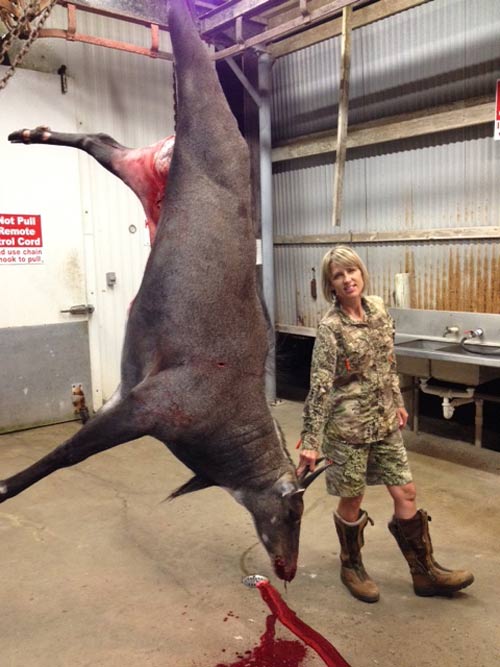 "Great visiting with you on the phone today. As I mentioned, attached are the field pics and hanging pics of the nilgai. As I mentioned, considering the recommended gun for these strong animals is a .375 H&H Magnum, Rhonda's was the most impressive kill I've seen in years of archery.

She has a 43# draw weight and using a 125-grain Silver Flame obtained a complete pass-through on a quartering shot taking out both lungs. but you couldn't tell that with all the red foam coming out of his nose! Bull was dead w/in 75 yards of the treestand. She did it all on her own as no guide was there. I'm personally blown away she had a pass through on this big and dense of an animal with that light of draw weight....that speaks volumes for that head." -Rob Nielson 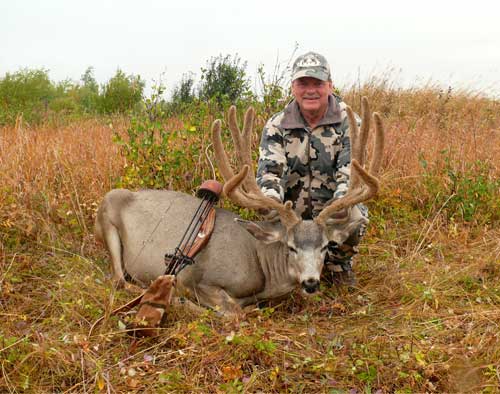 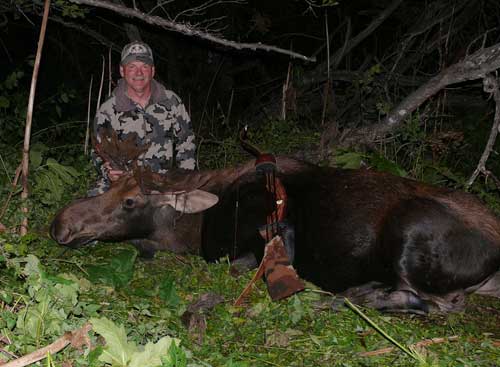 "I have had a pretty good fall so far. Shot this mule deer on Sept 1 out of a treestand at a waterhole. 17 yards angling behind the last rib up to the opposite shoulder right to the fletch. Made it 75 yards on a run. Arrow and broadhead in perfect shape to use again. Still shaving sharp. He grosses 171 and nets 166.

The moose was shot on Sept 13 out of a different waterhole, using the same arrow, the shot was 22 yards broadside. The Arrow entered thru ribs clipping one slightly. He made it app 60 yards. Arrow hanging by the fletch on the offside.

He broke my arrow when he went down (got up and down again and up and down again). Couldn't find the broadhead part. Grrrrrrr!! Be a great eating bull. Had a bigger bull come in grunting about 15 min later and stand right in front of my stand. Had 2 cows fighting. Great night. 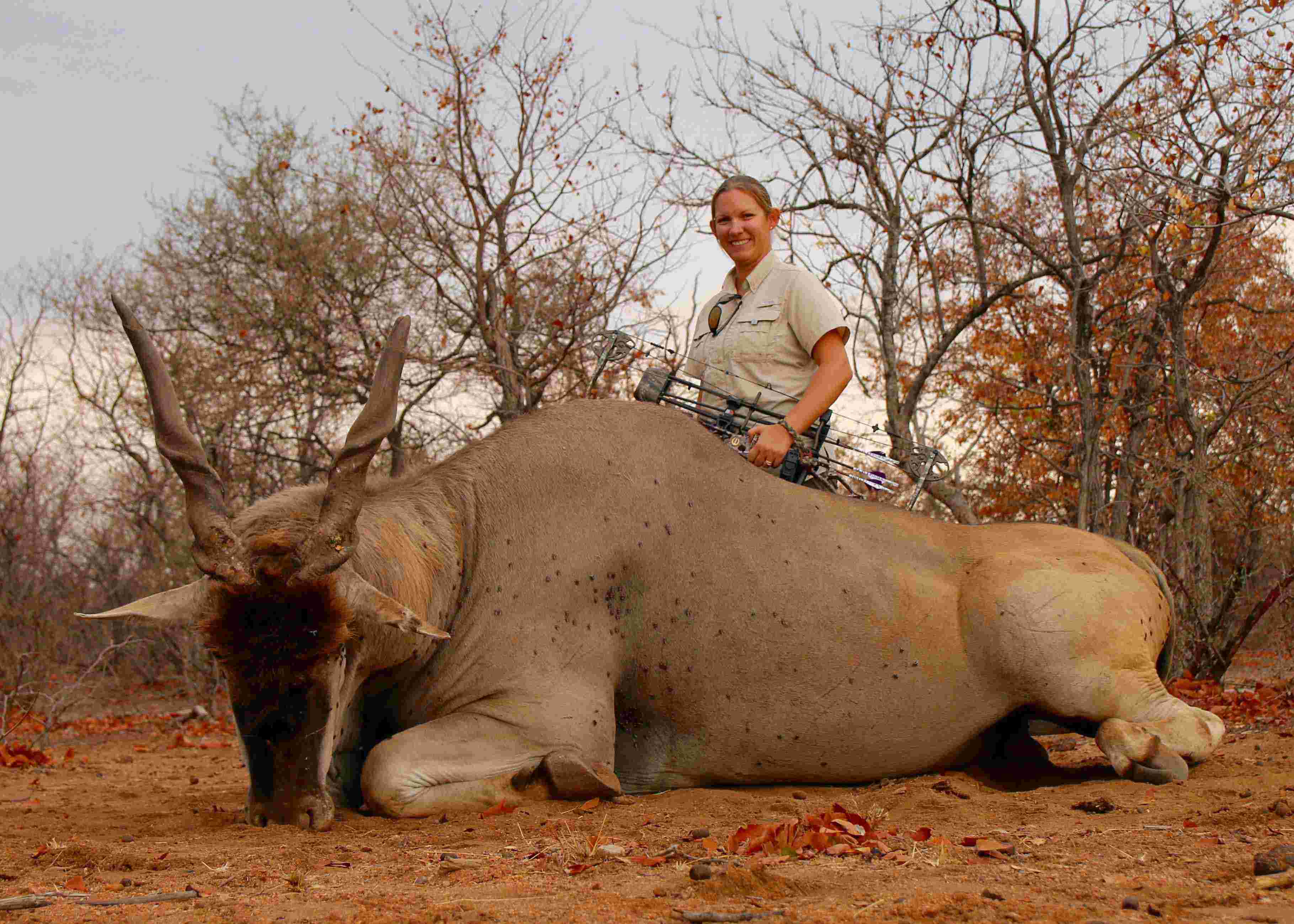 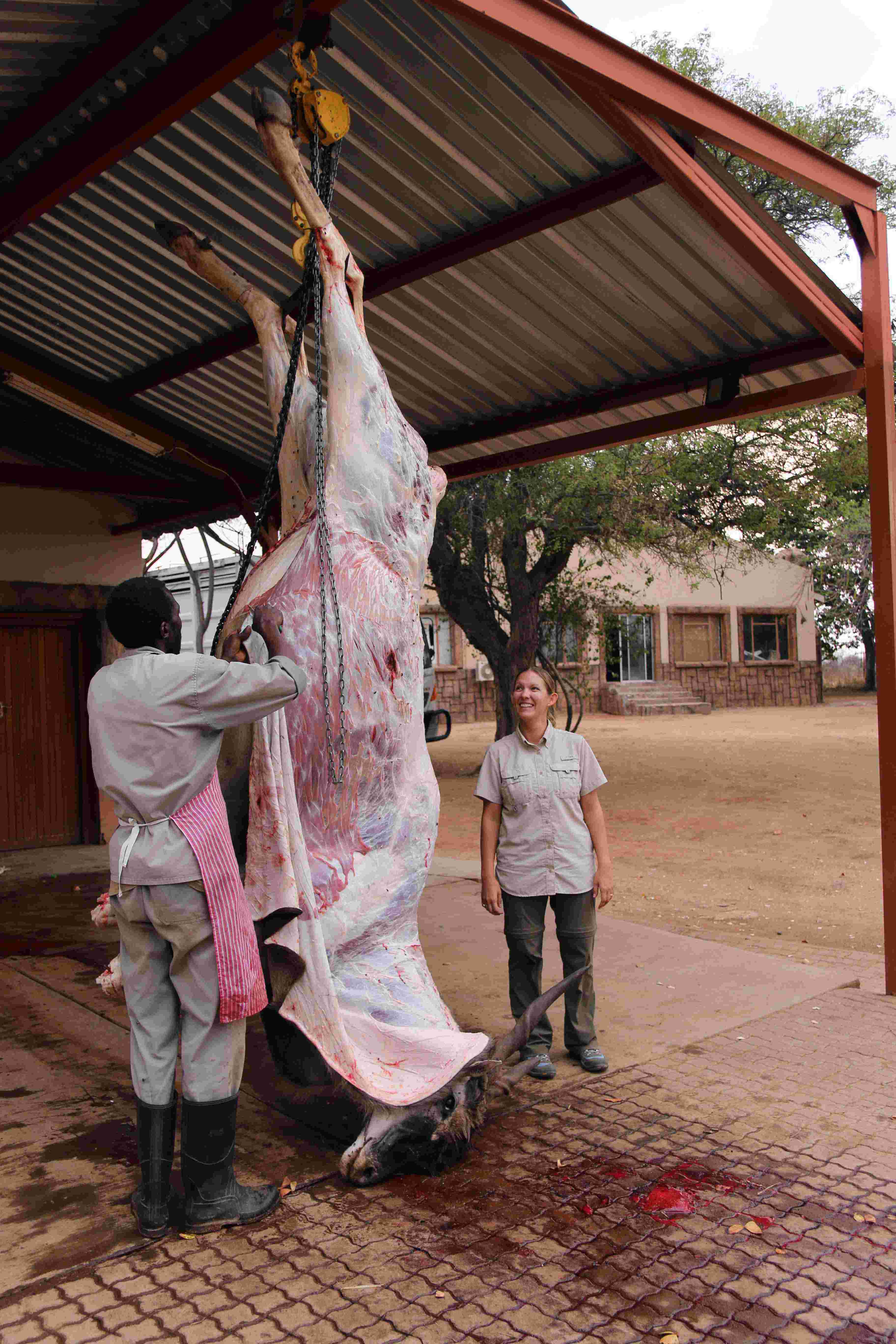 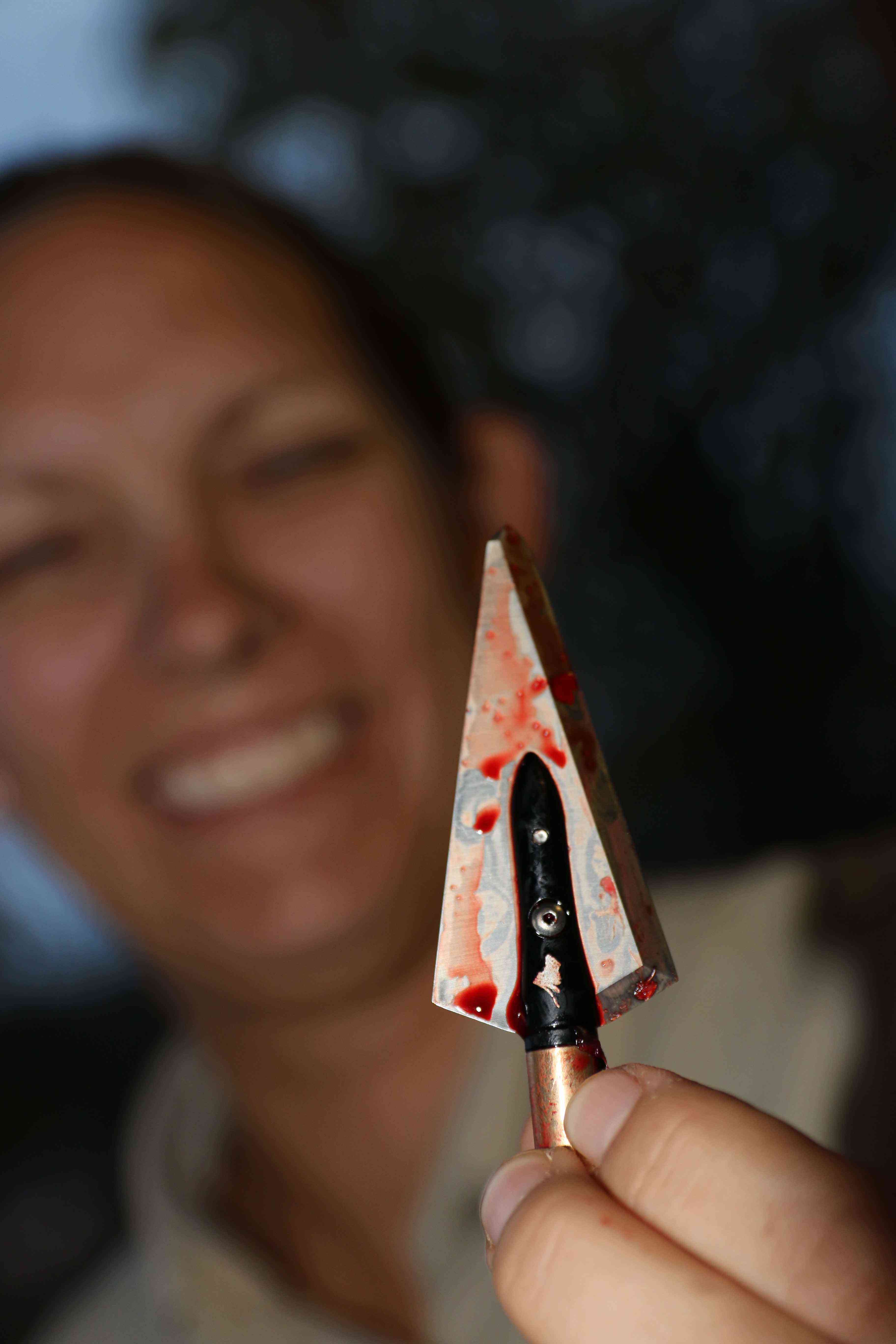 "We were only in the blind for a couple of minutes when a group of Eland headed right in, and with them was a very nice-looking bull. I had just gone over shot placement with my PH when the Eland put himself in perfect shooting distance. I barely had time to think as I grabbed my bow and aimed. The Eland was at a perfect quartering away shot, but while I was a full draw he took another step and was then at a very extreme quartering away. I quickly put my pin back in position and pulled the trigger. Because of the angle, I was worried that I had hit too far back, but the Eland only ran about 40 yards and then stopped. He tried to walk a little more, but couldn't and finally fell over and died. Upon recovery of the animal, we saw that my arrow had penetrated over 3 feet and nearly had a complete pass-through.

My PH was shocked that my little 42lb bow with such a short draw length could get that much penetration on such a large animal. My arrow is a GrizzlyStik Momentum, total weight is 535 grains, FOC is 28%, and the broadhead is a Samurai 200. The last picture of me with the broadhead was dug out of the Eland and it is still razor sharp!" -Emily Thompson of danger Close Outdoors 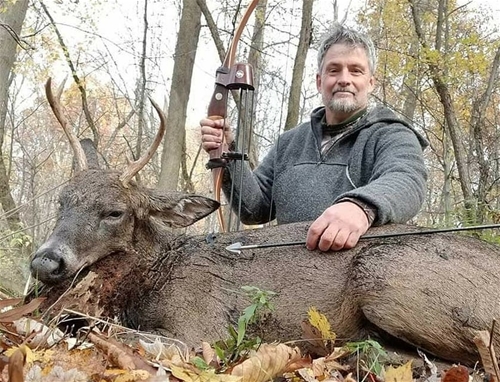 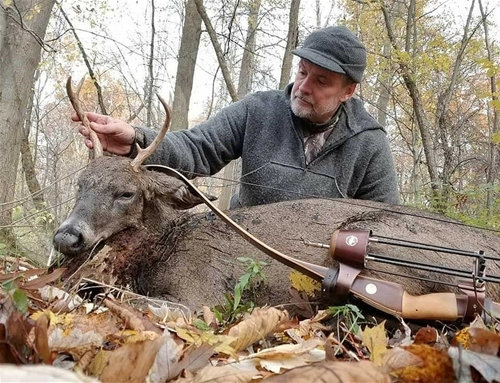 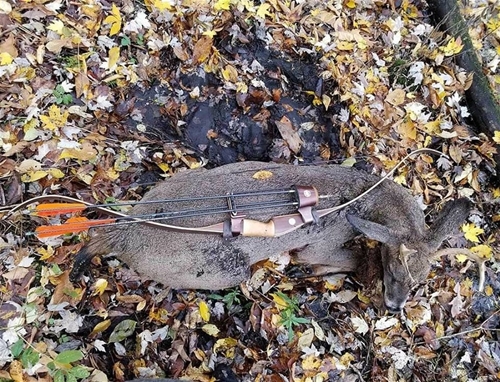 "60th Birthday Wish" - For his 60th birthday, Todd Smith gifted himself a present from his birth year of 1959. The gift? A classic 59' Kodiak one piece that he himself diligently refurbished with the intention of taking a deer this fall.